Rats aren’t something you want to find in or around your home – unless they’re your pets. Uninvited rats can be difficult to deal with, particularly as most of the deterrents that work on mice have little effect on larger vermin, and once they’re in, they’re hard to get rid of.

Having a rat infestation, whether it’s just a few determined rodents or a whole mischief (which is, funnily enough, the collective noun for a family of rats) can be both damaging to your home and dangerous for children and animals. It’s also more than a little unsettling knowing that they are in the walls or loft or running rampant around your property.

Wild rats can be highly aggressive when cornered: they won’t cower and run when confronted by humans, so the only effective way to rid yourself of them is to either catch and kill or catch and release far away from your property. Whichever method you choose, lethal or non-lethal, you’ll be pleased to know that the majority of rat trapping methods lean towards more humane options these days.

How to choose the best rat trap for you

Rat traps – are they not all the same?

Only if your image of rat traps comes solely from their depiction in cartoons. In reality, those old-school snap traps that consist of a thick metal wire attached to a small piece of wood, while still commercially available, are not really favoured anymore as they cause undue suffering. Rather than cleanly breaking the neck of vermin, they maim them and leave them to die a slow, painful death.

Instead, there are other options when it comes to removing an infestation, both lethal and non-lethal, including poison-baited traps, catch and release cages, and – for those of you who play too much Call of Duty – a fully automated, gas-powered, bolt-action trap that records the kill on its ‘Digital Strike Counter’.

We’ve gathered the best examples of all of these here, leaving you to make your choice based on budget, ethical sensibility and confidence of dealing with a rat you’ve caught that’s still alive.

So, unless you choose to go down the route of rodenticide poison, the only other question is bait.

Do I not just bait with cheese?

Again, we’re back to the wonderful world of cartoons. Whilst a chunk of cheese might work, you’re going to get far better results using bait that specifically appeals to a rat’s appetite. The pest control experts at Rentokil recommend peanut butter, tuna or chocolate spread as a far more attractive proposition for rats, but be certain to ensure you position your trap where it won’t entice pets or children.

So, where should I place my trap?

Rats are cautious creatures and, as such, prefer to travel along the edge of walls, so place your trap flat on the floor against a wall where you know there has been rodent activity.

Rats are also naturally wary of new objects, so while you may not achieve overnight success, be patient with your trap and the place you have positioned it.

How do I deal with rats I catch?

With gloves. Whether dead or alive, rats can carry Salmonella, Trichinosis and Weil’s disease, so should not be handled with bare hands. Anything the rat(s) come into contact with should be thoroughly washed after disposal and waste should always be double bagged in bin liners before being stored in a secure bin.

If you opt for catch and release, take the cage to an unoccupied, natural area of woods or fields, place the cage on the ground and release the trap’s door. The rat will see to the rest.

READ NEXT: The best gardening gloves you can buy right now

Yes, if you choose to bait your trap with rodenticide, make sure you secure any spare bait safely and securely, well away from children and always wear gloves when baiting the trap.

The Roshield Box and Bait trap might not be on the ‘humane’ side of the pest control fence, but this is a highly effective, efficient system – and one of the more popular methods of dealing with rat infestations.

The package is comprised of a lockable bait box and a rodenticide wax block. The bait is loaded onto a metal skewer and suspended inside the box, which is then securely locked ready to be positioned against a wall in the infested area.

Designed to be resistant to both tampering and/or the appearance of curious children’s fingers, once loaded, the bait – an irresistible mix of culinary grade wheat flour, blended with chopped wheat, other cereals and proteins bound together by edible waxes – gives off a unique chocolatey aroma to attract vermin.

It’s essential to handle the bait and trap with gloves, and the bait should be carefully stored away from where children and domestic animals can access it. It’s also essential to avoid breathing in any bait dust. 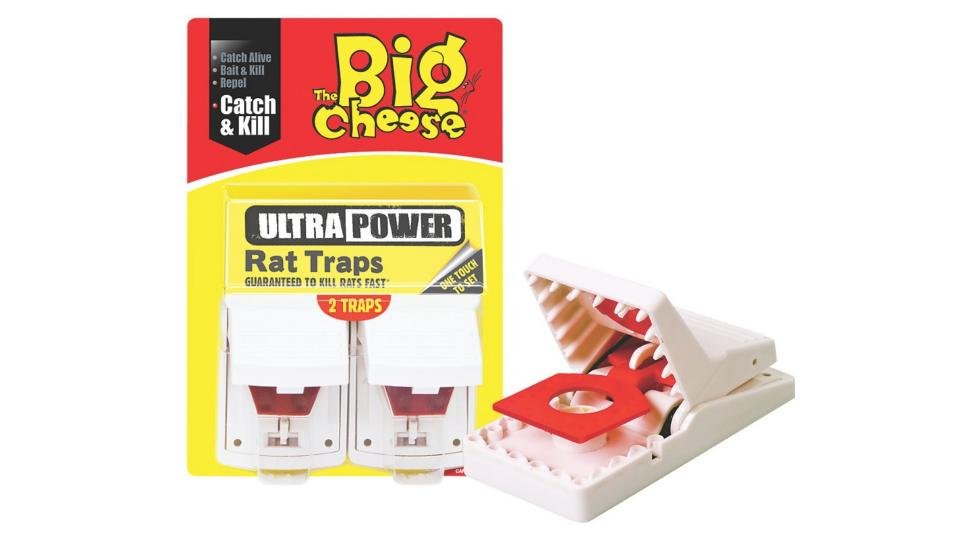 The STV Plastic & Metal Rat Trap set gives you two traps for £5. If you want to double your chances of a successful kill in one specific area, or cover two separate suspected areas of infestation, then this is a bargain buy.

Constructed from quality plastic and metal, these robust traps are quick and easy to bait thanks to a special one-touch setting. The deep bait tray ensures rats have to really stick their heads inside, leading to a swift, efficient termination once the spring is triggered, with no blood or guts to clean up.

Usable both inside and outside the house, over and over again, the catch is easy to dispose of afterwards and the traps can be reset within seconds. For a mere £5 you really can’t go wrong. 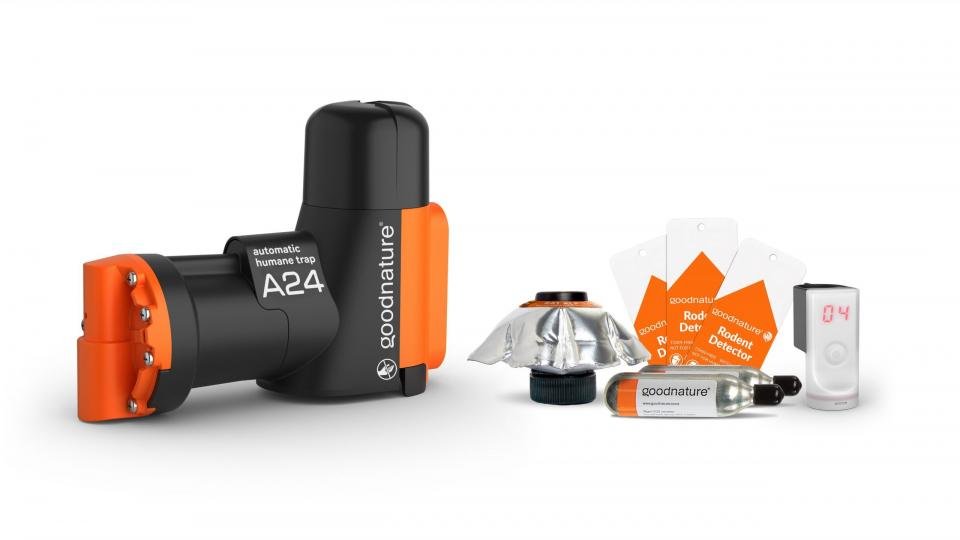 Simple to mount indoors or out thanks to an included mount block, the A24 utilises a bait bottle which can be easily filled and then screwed into the mechanism. Once a rat attempts to get to the bait source via the feeding tube, it releases a trigger which instantly fires the CO2 powered bolt. Once exterminated, the rat falls free and the A24’s Digital Strike Counter tallies up the kill.

Poison-free, each bait bottle dispenses automatically for six months while the CO2 canister (of which three are included) is good for 24 strikes before needing to be replaced. And for ultimate ease of use, the mechanism automatically resets itself until the canister is expended. 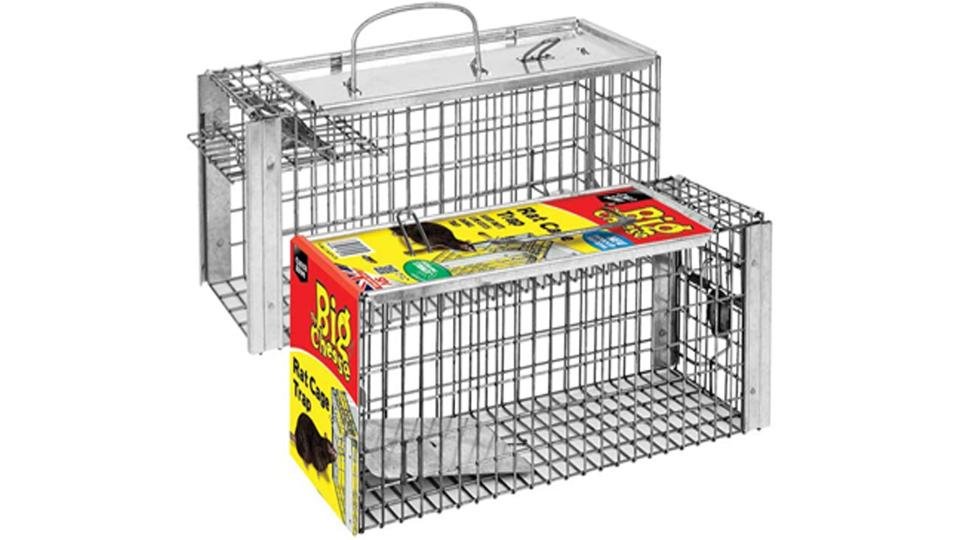 There is another, slightly old-fashioned humane method to deal with rodent infection: cage capture and wild release.

Ready to use out of the box, all you have to do is bait the trap and position it, before sitting back and waiting.

Built from rust-resistant galvanised metal and featuring a unique spring-loaded door that guarantees capture of even the quickest of rats, the build quality ensures there’s no escape for your captive until you’re ready to take the trap away out into nature to release your rodent unharmed. A hand plate underneath the carrier handle makes for safe handling, too, so there’s no risk from the claws or teeth of trapped rats.

Coming with a lifetime guarantee, the Big Cheese Rat Cage Trap is a top choice for those dedicated to animal welfare, but who still want to get rid of their unwanted rodent lodgers.