The popular American actor, Michael K. Williams, who was best known for his performance in the HBPO series, The Wire, recently passed away at the age of 54. While several celebrities and fans were shocked to hear the news of The Wire star dead, actor Dwayne Johnson expressed his feelings on receiving this shocking piece of news. The actor also mentioned how it was a pleasure working with the late actor, Michael K. Williams.

Dwayne Johnson recently took to his official Instagram handle and shared a memorable monochrome picture of the late actor, Michael K. Williams, and addressed a heart-touching letter to him on his demise. In the letter, he mentioned how much he will miss him and prayed for his family hoping for them to have the strength to handle the tragic loss. He wrote, “You’ll be missed, brother.  A real pleasure to work with you and call you a friend.  Strength, mana & love to your family during this very difficult and heartbreaking time.  Go rest high. dj.” (sic)

Many fans and celebrity artists were shocked to hear the news of Michael K. William’s demise and took to Dwayne Johnson’s Instagram post to express their grief. Many fans also added sad face emojis in the comment section and wished Willaim’s soul to rest in peace. Even Ryan Ochoa mourned the actor’s loss and stated ‘Trailblazer in our industry and a very special talent. So sorry for your loss!’. While other fans mentioned how much they will miss the actor. Take a look at some of the reactions to Dwyane Johnson’s latest Instagram post. 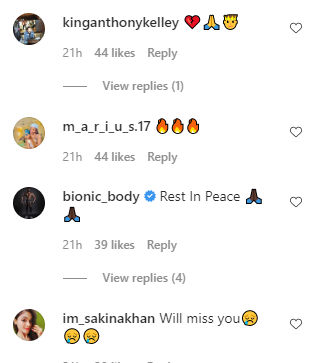 How did Michael K. Williams die?

Michael K. Williams was found dead in his penthouse in Brooklyn. New York Police recovered the 54-year-old actor’s body around 2 pm on Monday. New York Police Department (NYPD) spokesperson Lieutenant Joe Gimoel confirmed receiving an emergency call from William’s house in Brooklyn at 2 pm and later finding him dead upon arrival at his residence. The reason for the actor’s demise is still unknown as the NYPD stated that investigations were underway. Meanwhile, the late actor’s family released a public statement on Monday that read-

“It is with deep sorrow that the family announces the passing of Emmy nominated actor Michael Kenneth Williams. They ask for your privacy while grieving this unsurmountable loss,” William’s family representative said.

Get the latest entertainment news from India & around the world. Now follow your favourite television celebs and telly updates. Republic World is your one-stop destination for trending Bollywood news. Tune in today to stay updated with all the latest news and headlines from the world of entertainment.