VALENCIA. M.O.M: Mother of Madness is the title of a new Image comic that comes with the vitola of having been co-written by Emilia Clarke, the famous actress from the HBO series Game of Thrones. In a letter of introduction, the actress confesses that the idea suddenly came to her head on any given day. It was the result of the simplest mechanism for the elaboration of fiction, I was with a group of friends in a car chatting and a: “Wouldn’t it be funny if …?

Her motivation, she continues, is due to the fact that she considers herself “an absolute feminist”, although what really worried her when she began to write the script are young people and mental health. In fact, she underlines the word young because she already considers herself old at 34 years old. Starting from the basis that he saw the arrival of social networks and the effects they have, he remembers the years of absolute dominance of MTV and the chains of music videos not for leisure or hours of fun, but, he says, for what bad that they made her feel about herself. Now she is going to take revenge by increasing the self-esteem of the adolescents who are the way she was.

He also confesses that the vignettes were not his strong suit. Her brother was a fan of comics, but he wasn’t allowed into the store with her. That is why he began to read them when he had to play Daenerys O Qi’ra and thus toured dozens of comic conventions. In these unique meetings, he confesses that he discovered that the whole environment is “cool”, but he was concerned about the disproportion between women and men, although it was improving over the years. Hence the idea for MOM: Mother of Madness. A superheroine with whom she wants to fight against “toxic masculinity”, a problem that, she warns, “exists and is real”, taking the clichés of the superhero genre but really adapting it to the taste of women and their problems.

The point is that the superheroines of the world of comics, as a general rule, tend to be in lycra – just like superheroes, although traditionally one makes fun of saying that they are wearing pajamas – that’s why a superheroine diametrically opposed to that stereotype has worked, in some vignette he even misses a fart. Its protagonist has powers that come from his hormones. All the negative characteristics attributed to women according to the menstrual cycle, in their case are superpowers. It all started when he tried a strange experimental product that his father was creating in a laboratory, pills that he took suddenly one day in excruciating pain. The classic story of always in these genres.

The story takes place in thirty years, but that time jump serves precisely to criticize the claustrophobia that the life that we currently lead produces. Among the influences of the authors is the television series Fleabag for the dialogues that the protagonist had with the viewer. The problem with such a self-conscious fiction is that, with the already grotesque world of superheroes, when it comes to denouncing the lack of parity in the workplace, the medical problems of women or the machismo in general, it seems that we are witnessing a self-parodic pamphlet rather than a coherent story at the service of an idea. 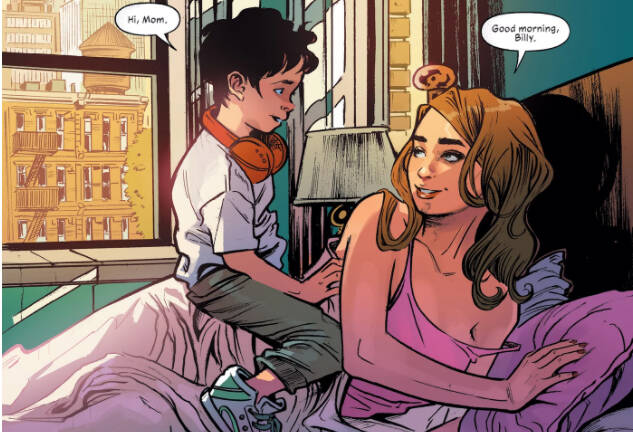 The work is a collective work with the writer Marguerite Bennett –what Clarke calls his comic book guru – the illustrator Leila Leiz, in collaboration with Isobel Richardson and the cover artist Jo Ratcliffe. It is quite a declaration of intentions when on the cover of the first installment the protagonist appears with a balaclava like those that popularized the Pussy Riot.

In the end, at least in this first issue, the issue that is most exposed is that of the double shift that the protagonist faces as a single mother. If Clarke had one goal, it was for her young female readers to have before them a role model who was fallible and weak. The most explicit part is that, as the protagonist’s superpowers emanate from her emotions, in order to be at work she has to be introverted and, consequently, the men around her pass over her as is often the case in certain workplace environments. job. 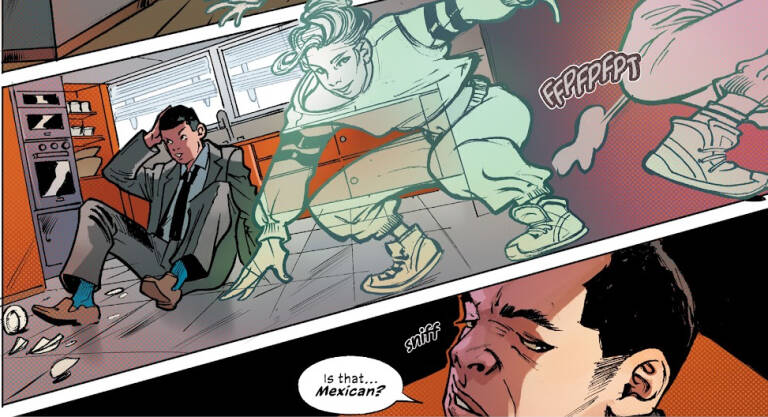 Assuming that the superhero genre is ridiculous per se, this way of swimming between two waters, humor and superpowers with a tortured history with the civilian superhero, perhaps it would have been better to go directly to parody. Perhaps in this field, the personal experience of Clarke and her friends about the obstacles that women encounter on a day-to-day basis could have more bite.

His obsession with creating an exemplary and iconic figure for young people is too willful. It’s all very obvious. If in this column we had to recommend a superheroine to the adolescent reader, we would go straight to the daydreams of Julie doucet
who knew how to differentiate reality from fiction without depriving us of superheroines who also had the rule -in this case brave astronauts- and incisively investigated the ancestral machismo of men, especially that of those who are allies, making each story a unique a masterpiece difficult to forget where there was not only talent, but also something much more important, honesty with oneself and an attitude that was not at all complacent.

Many Thanks To The following Website For This Valuable Content.
Emilia Clarke (Daenerys in Game of Thrones) writes a comic about a superheroine and single mother