Low gas supplies on the eve of winter are driving higher gas and electricity prices. Once the winter is over, ABN AMRO expects prices to fall, but normalization of prices is not expected to happen until after 2023. For the electricity prices ABN AMRO expects a similar pattern. A decline as soon as the winter is over, but still a persistently high level thanks to the high coal and gas prices.

Higher energy prices have major consequences for the food sector. For example, a lot of energy is needed for the processing of potatoes, dairy products or bread. Energy is needed, for example, to power the machines and equipment and to cool and freeze the products. Products are also steamed and heated that require gas. According to Statistics Netherlands (CBS), the food industry consumed 77.8 petajoules of energy in 2020. About three percent of the total Dutch energy consumption goes to the food industry. Most of this energy consumption consists of natural gas. In 2020, the food industry consumed 55.4 petajoules of gas.

Heavy consumption of energy is inherent in the food industry. Although investments have been made in recent years in sustainable alternatives and energy-efficient solutions, energy consumption is still relatively high compared to many other sectors. This means that the sector is hit relatively hard by the higher energy prices. 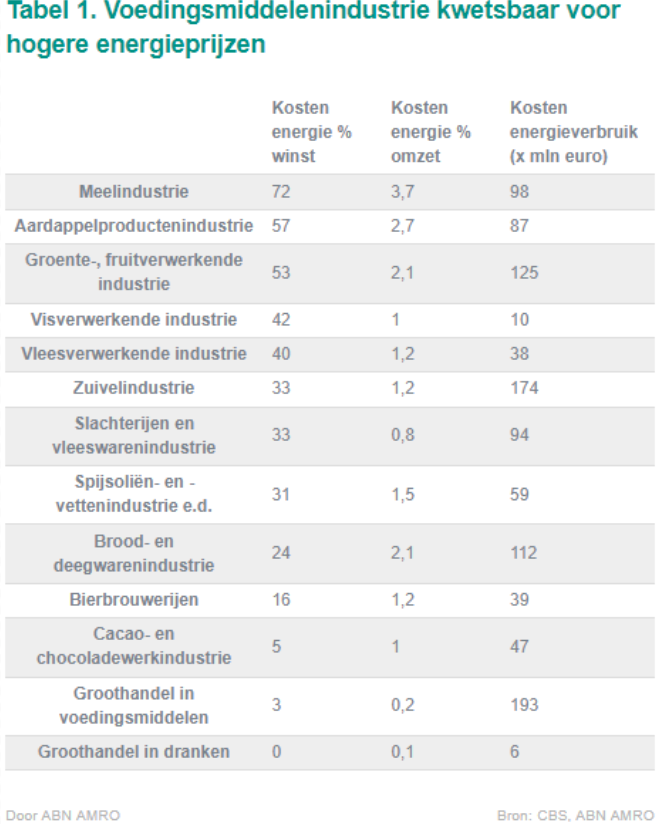 The vulnerability of sectors says nothing about individual companies. For example, companies may have invested in sustainable and/or energy-efficient solutions, such as heat pumps, geothermal energy or innovations that reduce energy consumption, such as the Pulsed Electric Field (PEF) technology. The latter solution can increase the shelf life of food in an energy-efficient way.

It is also important which energy supplier and which type of energy contract a company has. Companies that have fixed their energy tariffs for a longer period of time are relatively unaffected by the price increases in the short term. However, most of these companies will also immediately have to deal with higher costs, because it is usual to fix only part of the rates in order to retain some flexibility in business operations. For the same reason, the duration of permanent contracts is usually no longer than a few months. This means that most major consumers in the sector will certainly have to face the price increases next spring. As mentioned above, ABN AMRO does not expect energy prices to normalize before 2023.

Raw material prices
In addition to higher energy bills, companies in the food sector are faced with higher purchasing costs. Various agricultural products have risen in price in recent months. In October, the food price index rose 31 percent from October last year and is now at its highest point since July 2011. 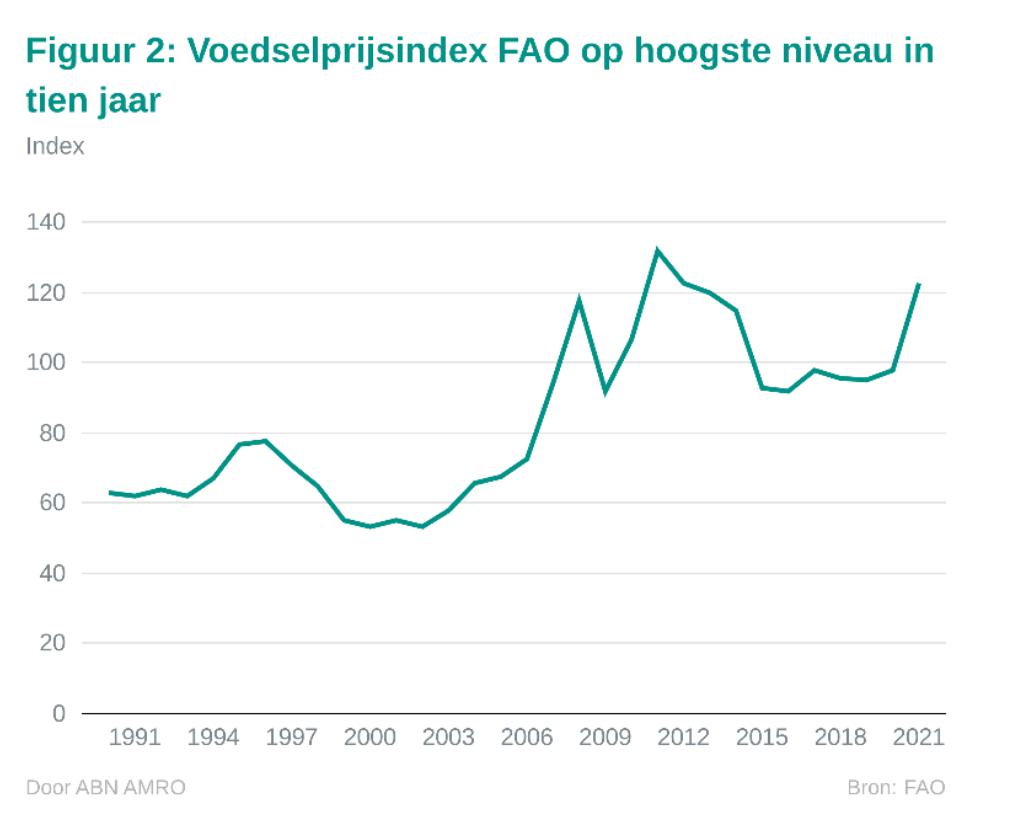 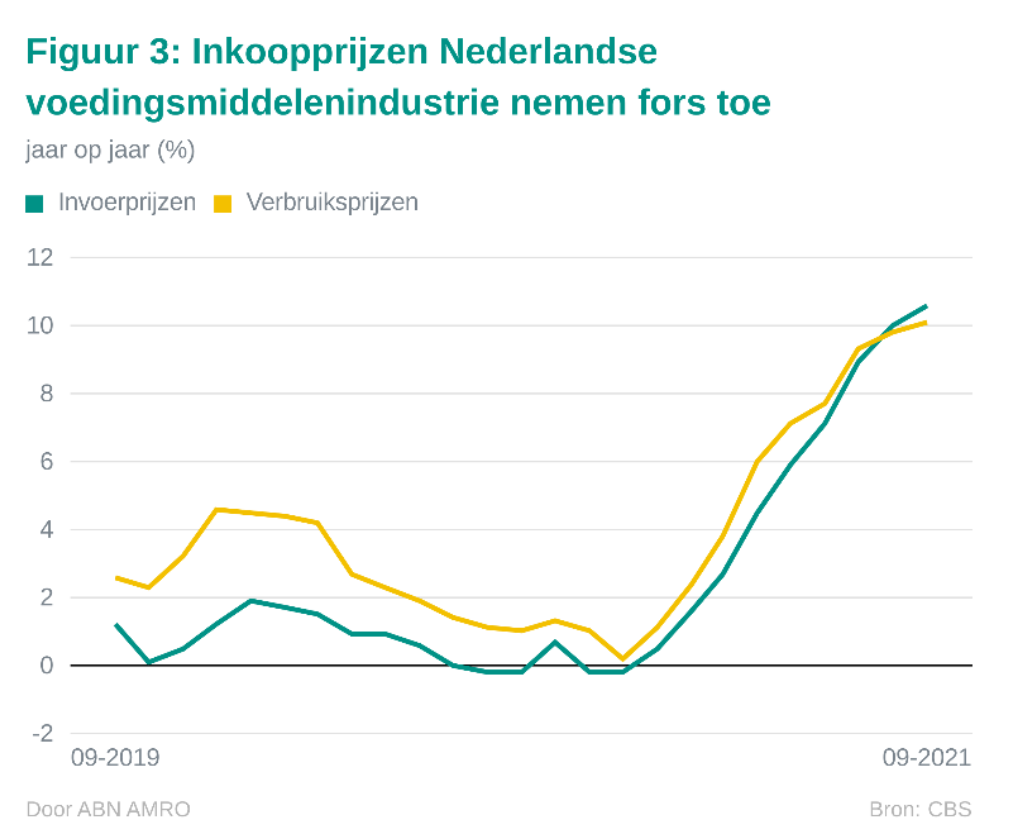 The FAO food price index consists of five categories: meat, grains, vegetable oils, dairy and sugar. In October, the underlying indices of all these categories rose year-on-year, but the causes are diverse. Vegetable oils have increased in price the most due to a lower supply of soy and palm oil in combination with an increased demand. Sunflower oil also rose in price. Meat prices rose year on year, but have been falling month on month for some time. The main reason is the lower import demand for pork from China. The price of sugar is high because food producers have to compete with fuel producers. Both industries need sugar. With the current high fuel prices, it is more attractive for sugar farmers to sell their products to companies that process sugar as fuel.

The higher purchase prices of agricultural products have an effect on the output prices of food manufacturers. For example, the latest figures from Statistics Netherlands show that the selling prices of Dutch food manufacturers rose by an average of 8 percent in August, in line with the increase in the 10 percent that they paid more for the purchase of their products.

All signals point to purchasing prices for food manufacturers remaining at a high level. For example, higher fertilizer prices, labor shortages in several western countries, changeable weather conditions and high transport costs are all factors that can push prices up further. In addition, farmers will be reluctant to sell their products for lower prices if there are so many uncertainties in the future.

Higher prices put pressure on margins for food companies
The expected price increases will put pressure on the margins of food manufacturers and traders for a relatively long period of time. Whether companies in the sector must and can pass on their higher costs to their customers depends, among other things, on the contracts that the companies have concluded with their suppliers and their customers.

The question then is whether supermarkets will charge consumers for these higher purchasing costs. Market leader Albert Heijn has already indicated that it wants to keep prices stable for as long as possible. According to market researcher GFK, a number of foodstuffs such as bread and beer have already risen in price, but consumers have not yet noticed much of the price increases that make the production process of food more expensive. According to the CBS, the prices that the Dutch pay for food have not increased. 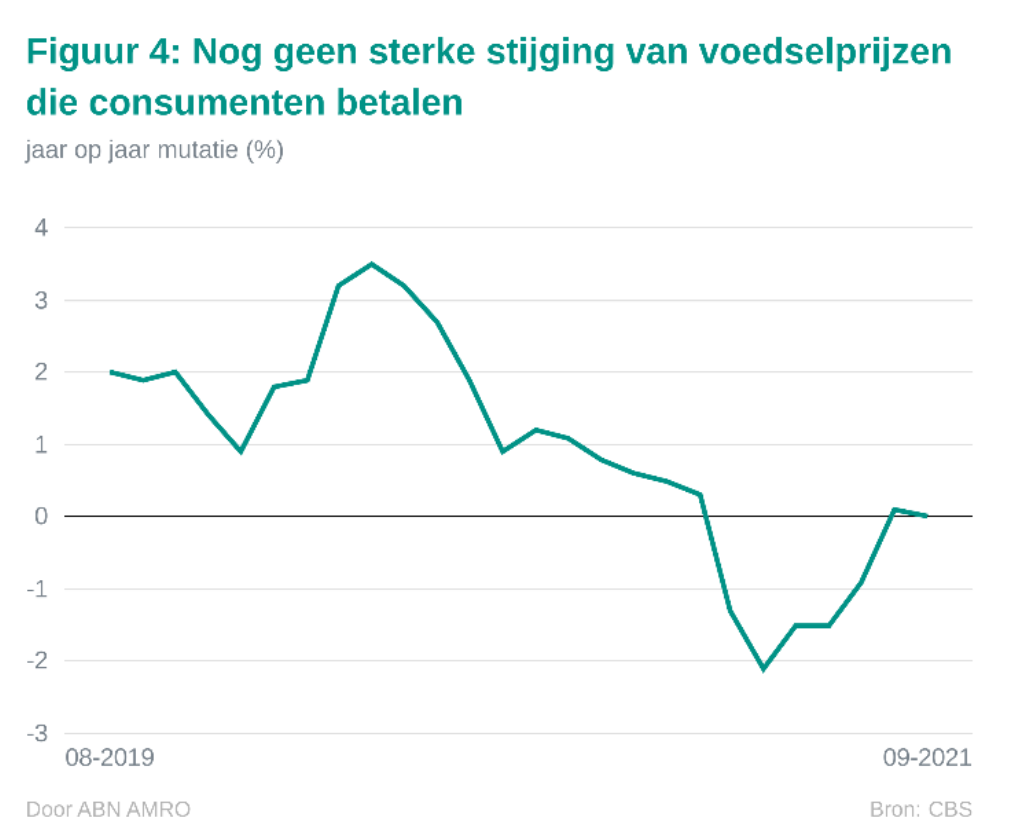 In general, higher raw material prices are not directly reflected in the prices that consumers pay in the supermarket. The price volatility on the world market is largely absorbed by the chain. But it still seems untenable that the higher energy, transport and raw material prices will not also partly find their way into the prices that consumers have to pay in the supermarket for their food.

Work card
Not only do the higher prices have an effect on the business operations of food producers, the shortage of labor also keeps the companies busy. In the third quarter of this year, approximately a quarter of Dutch entrepreneurs indicated that they were faced with a labor shortage. This shortage is especially high in the hospitality industry, transport companies and technology entrepreneurs. Among food producers, almost a fifth of entrepreneurs indicated that they experienced the labor shortage as an obstacle in their business operations. This number is at the level before the corona crisis, as can be seen in figure 4 below, and thus at the highest level since Statistics Netherlands started the measurement in 2012. 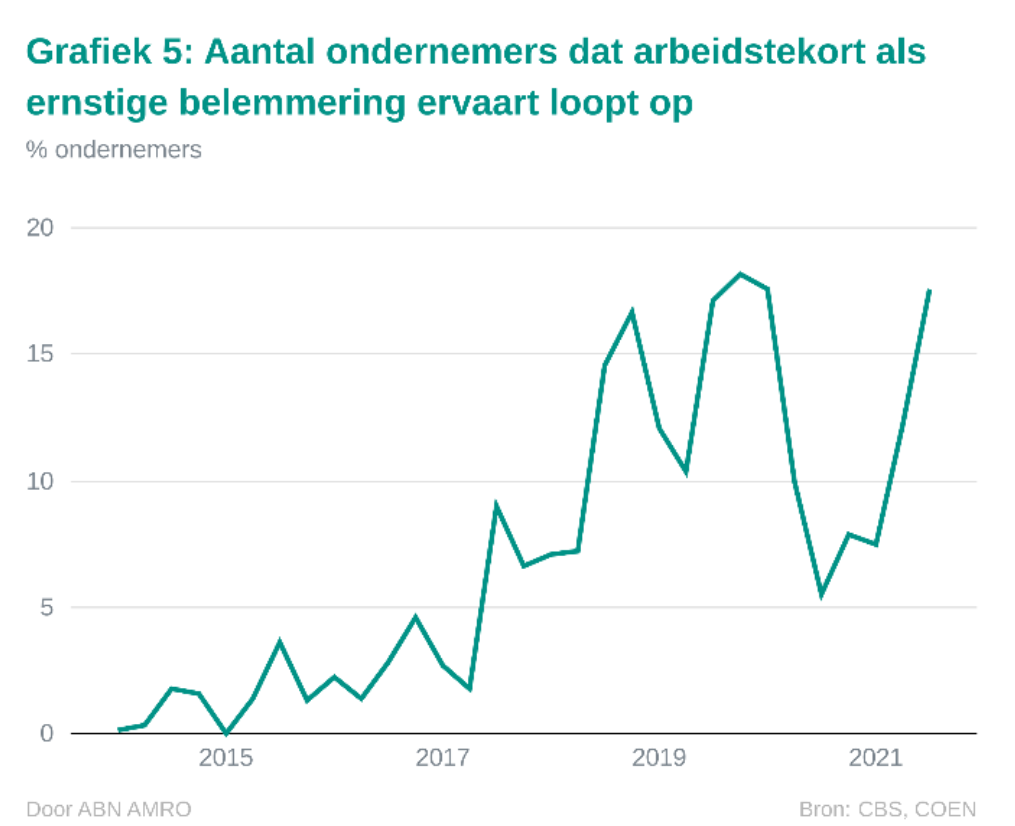 In the food industry, in particular, there is a shortage of technically trained personnel. According to the UWV benefits agency, there is a relatively high demand for mechanical operators within the food industry and for process technologists. But the demand for quality controllers, production managers and panel operators has also increased. According to data from Werk.nl of the UWV, the number of unfilled vacancies that can be specifically assigned to the food industry has approximately doubled in the past twelve months.

Vacancies in the food industry are difficult to fill, as is also apparent from the figures from the UWV and the arbeidsmarktindicator van ABN AMRO. For example, the percentage of unfilled vacancies for professions related to the Food sector is even higher than in Healthcare and considerably higher than in other industrial branches. An unfilled vacancy means that no jobseeker can be found, taking into account the travel distance that employees are willing to travel for their ‘desired profession’.