Something that has survived the past. That’s the definition of “relic,” the title word for Australian director Natalie Erika James’ debut. A relic is an antique that is believed to be valuable for its historical significance. In short, something to take care of. A perfect title for this horror film that is nothing more than a reflection on what we owe to our elders.

The disappearance of Edna (Robyn Nevin, ‘The Matrix’), a woman who lives alone in an old house in the middle of the country, will take her daughter Kay (the great Emily Mortimer) and her granddaughter, her daughter, Sam (Bella Heathcote, ‘The Neon Demon’), to visit Grandma and find out she’s losing her mind. Or so it seems.

‘Relic’ begins with a shot of an old woman at home: she is naked, vulnerable, alone … Alone? Throughout the film, the young director will play misleading and ambiguous, taking advantage of the audience’s expectations in a very intelligent way. As we are watching a cataloged film of a specific genre, terror, we read Edna’s behavior with that filter: is she possessed? Is she accompanied by a threatening presence? In any other scary movie, what appear to be the delusions of an old woman are clues to a supernatural mystery that will be revealed at the end; here it is rather the opposite. Something similar to what M. Night Shyamalan did in ‘The Visit’, and in fact Nevin has a physical appearance very similar to the grandmother who played Deanna Dunagan, but James takes the story in other directions.

Everything that seems out of place in Edna’s behavior could be explained by degenerative diseases typical of the third age, more specifically Alzheimer’s, a disorder suffered by Natalie’s own grandmother Erika James (which served as the inspiration for ‘Relic’, as she has said in numerous interviews). Absences, talking alone, suddenly becoming aggressive and paranoid, leaving notes to herself throughout the house … The director plays with all of this, creating restlessness and restlessness with elements as simple as the aged body of the grandmother and her voluminous hair white as a witch’s. Few things are more terrifying than illness and old age, let’s face it, and James knows it (as did Michael Haneke when he did ‘Love’, which had some very creepy scenes). What is threatening about Edna may be simply her fragility, a terrifying fragility because we recognize her as human and inevitable.

As important as the grandmother is the house, which (attention: cliche) is a character unto itself. That little house in the country that is also decomposing, like its owner, makes sinister noises, is full of old and disturbing junk and a growing darkness reigns. (mold spreads up her walls as bruises appear on Edna’s body). The darkness is one of the key elements of the atmosphere that James builds, although it is not the only tool that the director uses to play with one of the greatest sources of unease in the film: what is not seen. Through chiaroscuro lighting, the precise use of focus, sound or frames that hide more than what they teach, ‘Relic’ provokes terror by what is sensed, what is imagined and threatens out of the field, as it did 20 years ago Alejandro Amenábar in ‘Los otros’, a film that the director has confessed as the cornerstone of her cinephilia. 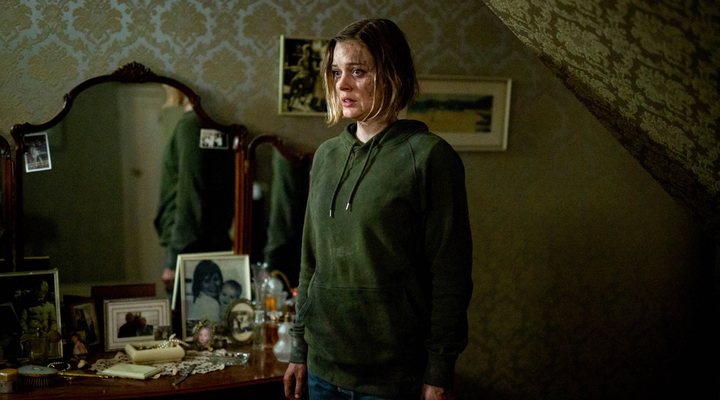 Not everything is suggestive, and in fact the film makes a progressive ascent towards madness and violence, ending with a very disturbing third act. And it is not a perfect film: for example, it abuses dream sequences that only emphasize what we are already being told in a more subtle way; or the character of the granddaughter, basically instrumental and devoid of her own entity. But ‘Relic’ is a delight for those of us who enjoy an atmospheric, allegorical and emotional horror film, and it has one of the most poetic, powerful and unforgettable endings in recent years. In those last minutes is the greatest discovery of this debutante that we will have to keep track of: having found such a perfect image to portray the terror of senility.

Caring for those who cared for us

‘Relic’ is also a story about something very human and universal: the guilt we feel for abandoning our elders. James supports this thesis with various elements, such as a subplot about a forgotten great-grandfather or the sequence in which Kay visits the asylum where she plans to enter her mother and comes across an old man who looks at her like a terrified specter. “Isn’t that how it works: your mother used to change your diapers and now you change them to her?”, reminds Kay of her daughter Sam.

The monster in this scary movie is none other than old age, and salvation, as the aforementioned ending makes clear, is to look old age in the eye. Facing it and all that it means: how unfair we are with our elders and the certainty that one day we will be in their place. That the mother in front of us may be a stranger, and that what torments us is what needs us the most. That is really scary.

The best: The unforgettable, poetic, terrifying and emotional ending

Worst: There are certain moments in his disturbing third act that are out of tune.

Many Thanks To The following Website For This Valuable Content.
Review, ‘Relic’: When the monster is old age