Kareena Kapoor Khan and Saif Ali Khan’s wedding was one of the most talked-about affairs of B-Town. The beautiful pictures from their intimate ceremony are still loved and shared by their fans and family. Most recently, Saif Ali Khan’s younger sister, Saba Ali Khan, treated fans to an old wedding photo of the celebrity couple. Kareena Kapoor re-shared the photo on her social media and gave a sweet reaction.

If you have ever checked Saba Ali Khan’s social media handle, you know she loves taking trip down memory lane. From pictures of her parents to adorable snapshots of the Pataudi kids, Saba got it all. Recently, she dug out an old picture from brother Saif and Kareena’s wedding album. Saba posted the photo and wrote, “Khudahafiz (sic).” In the picture, Kareena Kapoor Khan is in the heirloom sharara she wore on her wedding day. Saif, on the other hand, is wearing his brocade bandhgala jacket. The actress re-shared the photo on her Instagram stories and added a heart emoji. 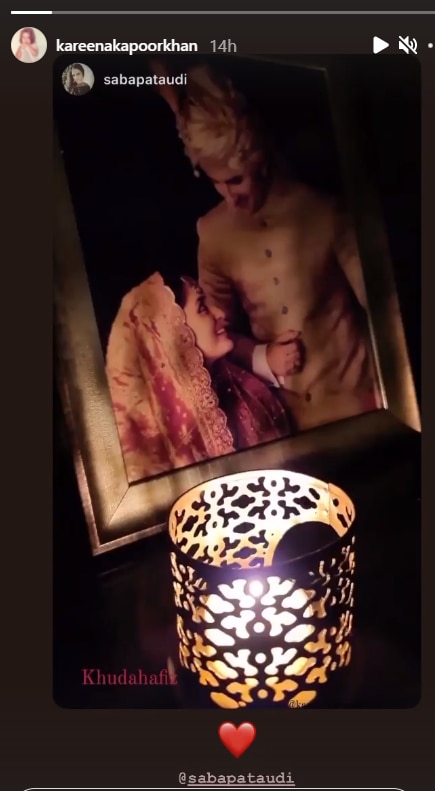 Recently, Kareena Kapoor Khan was seen spending most of her time with her family and friends. On September 4, she posted a picture with her father Randhir Kapoor, mother Babita and elder sister Karisma Kapoor and called them her “world (sic).”

On the work front, Kareena Kapoor will be seen next in Laal Singh Chaddha. Directed by Advait Chandan, the film features Aamir Khan in the lead role. It is the remake of Hollywood blockbuster Forrest Gump, which starred Tom Hanks.

ALSO READ| Kareena Kapoor’s pic with parents Randhir, Babita and sister Karisma is all about love

Click here for IndiaToday.in’s complete coverage of the coronavirus pandemic.